Thank you volunteers! Broom removal a tough job but we’re starting to reclaim the Bear Mountain Parkway corridor and the trimming piles are starting to grow. It is easy to identify broom this time of year, as it flowers, and we still have a couple weeks before seed pods start to form so it is a race against time to make the biggest impact. More volunteers are always welcome, it isn’t too late to contact us to join or feel free to operate on your own with some advice:

Most importantly, have fun! It is good exercise and a great way to meet neighbours. 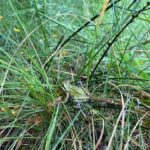 Invasive species are an ecological and economic threat to a resource-based economy like British Columbia’s. Langford’s economy is not based upon resource extraction, but that does not mean that invasive species are not a hazard to our citizens, pets, and local wildlife.

Invasive Species Council of BC is a province-wide non-profit organization that educates people and other organizations about invasive species, funds research into prevention, and initiates and supports actions that improve the health of BC’s natural ecosystems. The Invasive Species Council of BC does not remove invasive species but provides the resources and knowledge to do so.

Here is a link to Scotch Broom information. https://www.coastalisc.com/scotch-broom/